The Five Portals are useful in situations where you are not quite sure whether to step in (or to give of yourself). The Five Portals enable to you to act (even if it is by choosing not to act) via the following questions: 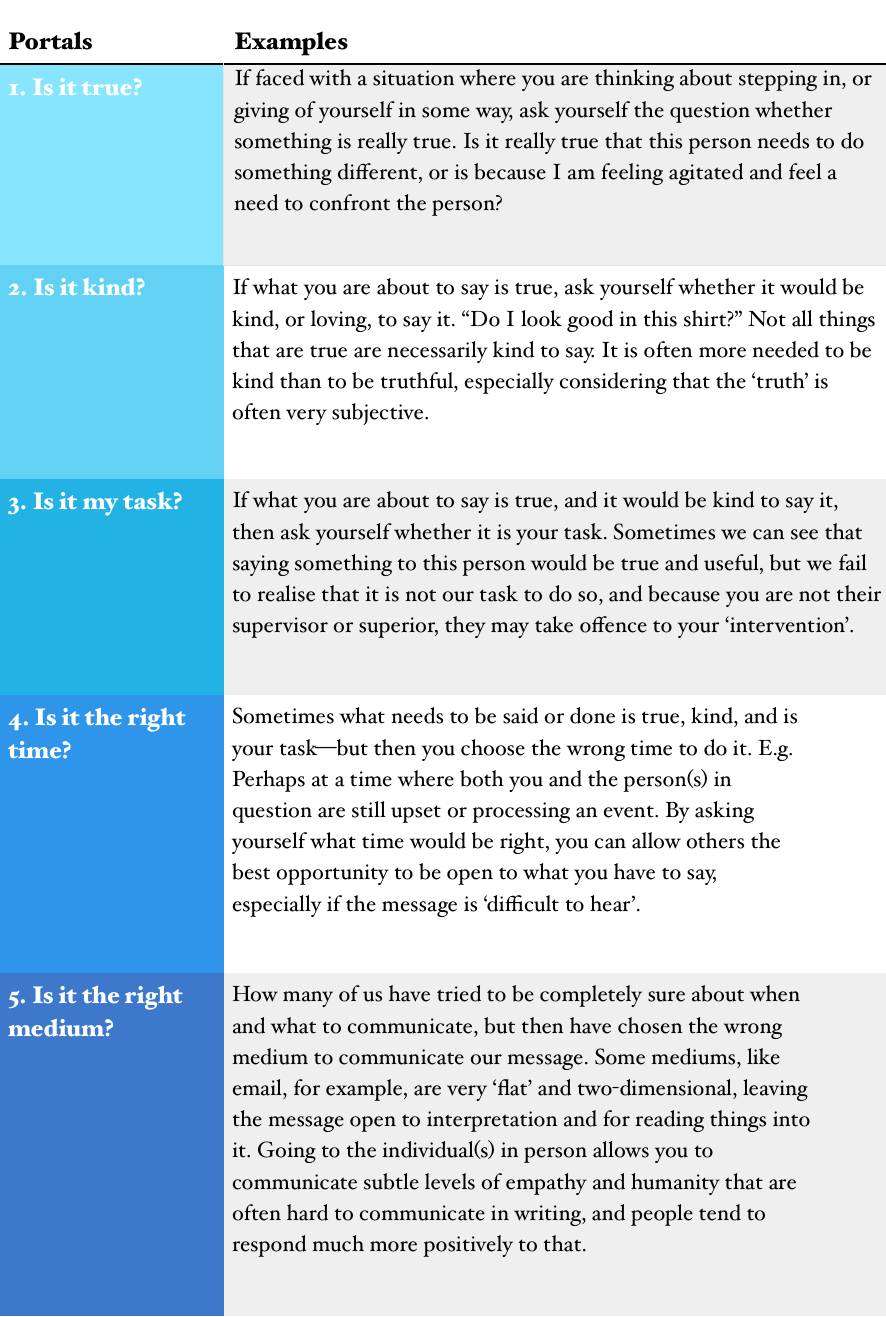 A scenario to illustrate the Five Portals in practice

The other day I drove into a car parking complex, almost running over two teenage kids racing down the ramp on one, shared skateboard. I stopped the car and walked over to the kids, which allowed me to prepare myself a bit. These kids were probably not going to care with what I said, unless I made sure I said it in the right way. They might even resent ‘another adult telling them off’, so to speak. When I reached them, I said: “Boys, if I had run you over just now, I would be devastated right now. Do you think you could go to somewhere safer to do this please?” They looked at me a little perplexed, but agreed. After I had parked my car properly, I saw the kids walking quietly down the road.

I think working with and being aware of the Five Portals helped me approach this situation the way I did. It was certainly factual (it was true) that it was dangerous what they were up to, and it was a safety issue to let them know (it was kind). I also felt it was up to me to tell them, as there were no other adults around at that moment (it was my task), and it had to be straight away (it was the right time). The fact that I made sure that I communicated empathy and honesty when I approached them face to face (it was the right medium), helped them to accept and honour the request.

As with many situations, I didn’t really have time to go through the Five Portals literally before I talked to the boys. But by knowing them, and by being committed to using them wherever possible, we can come to use them more intuitively. Being a teacher and educator myself, I am now so used to using empathetic statements in situations of conflict, because I just know from experience that it is much more likely that my message will be accepted. Like other specific strategies, the Five Portals is a very specific strategy and tool that gets us started using important principles.  Once we become more familiar with the principles, we can adapt them more quickly and to many different situations.

Note: The Five Portals have been adapted from the Four Gates of Patanjali.