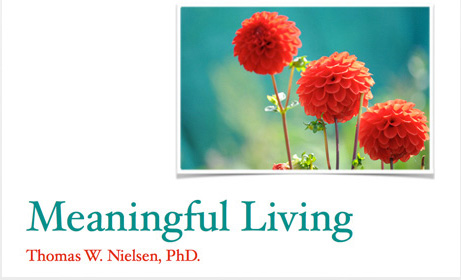 Our modern world is a diverse and fascinating place. But it is also a very complex and challenging place, full of consumerism, materialism, and virtual ‘realities.’

Some say we, as a human family, are in an existential, or spiritual, crisis. Many are pointing to the curious finding that depression and suicide rates have increased significantly worldwide since the end of World War II, despite the fact that most western countries have at least doubled their spending power (Seligman, 2002).

Why is that? We don’t know for sure, but the research is quite clear on one thing at least: as long as our basic needs are met, more money does not make us substantially happier. To feel truly happy and healthy on all levels—physically, emotionally and psychologically—we need to feel that there is meaning in our lives.

What does it mean to have ‘meaning’ in our lives?

While what is meaningful to one person can be something very different to another, there is one common denominator for what people, across cultures, races and religions, report as giving them meaningful happiness: it is that of being something for others. What all definitions share is an element of feeling inter-connected with someone or something other than oneself, and as importantly, feeling that one is able to contribute to those connections (Nielsen, 2011).

Whether it is contributing to one’s family, friends, the community, the environment, or a cause, what we humans describe as meaningful in our lives most often contain an element of having the opportunity to give of ourselves to someone or something beyond ourselves. The Greeks called it ‘eudaemonia’—the meaningful life.

Research shows that giving to others is one of the strongest predictors of increasing our happiness and health (Post, Neimark, & Moss, 2007). Personal pleasure is not to be dismissed, but it is having meaning in our lives that accounts for our deepest levels of happiness. When we give to others, we not only have higher and more meaningful levels of happiness, but we also are more resilient in the face of adversity and we recuperate more quickly from traumatic events.

Several studies have even found that giving is strongly associated with reduced mortality. For example, Oman, Thoreson, and McMahon (1999) followed almost 2000 individuals over the age of 55 for five years, and those who volunteered for two or more organizations had a 44 per cent lower likelihood of dying within the period of the study—14 per cent lower than those who exercised four times a week.

As is obvious from the studies showing the intimate links between generosity and our immune systems, giving is not just healthy for our physical health and longevity, but also for our psychological and emotional health. Thoits and Hewitt (2001) found that giving to others enhanced happiness, life satisfaction, self esteem, sense of control over life, physical health, and lowered depression in a sample of 2681 individuals. Several studies confirm that giving has a significant positive impact on mental health, happiness, hopefulness and social effectiveness (e.g. Billig, 2000; Scales, Roehlkepartain, Neal, Kielsmeier, & Benson, 2006).

Giving as a principle of living

Giving can be seen as a way of being, rather than any overt action as such. For example, just five minutes of gratitude will cause a shift in the nervous system to a calm state, called ‘parasympathetic dominance’, which is where heart, breathing, blood pressure and brain rhythm are synchronized (McCraty & Childre, 2004). In another study, after a month of practicing appreciation for 15 minutes a day, 30 individuals experienced a 100 per cent increase in the beneficial hormone dehydroepiandrosterone, as well as a 30 per cent reduction in the stress hormone cortisol (McCraty, Barrious-Choplin, Rozman, Atkinson, & Watkins, 1998). Gratitude, in other words, as an example of more subtle and internal ways of ‘giving,’ produces very similar health benefits to overt giving.

All of this doesn’t mean, of course, that we should aim never to be sad or have conflicted feelings. Beyond happy and sad is possibly the idea of treating all feelings, difficult or pleasant, with compassion and understanding, because it is through a generous and loving attitude toward ourselves that we manage to learn from negative emotions and actions, and ultimately, rise above such events.